#BellevueStories: How does a school shape a person?

#BellevueStories: How does a school shape a person? 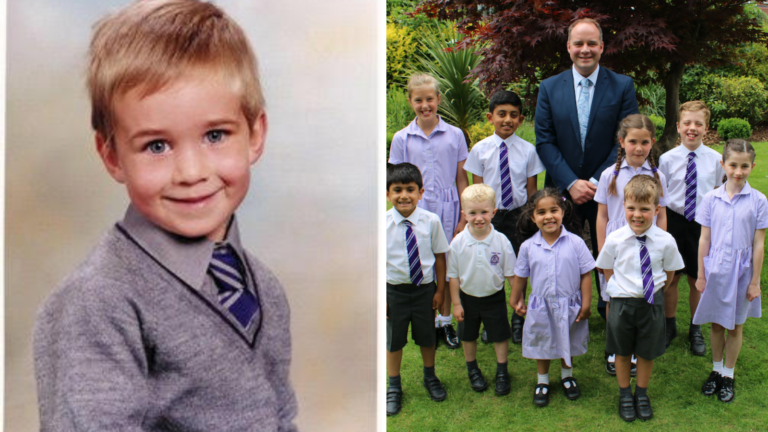 How do our school days shape our lives? As he approaches the start of his headship at Forest Preparatory School, a Bellevue school in Timperley, Cheshire, we hear the #BellevueStory of Graeme Booth, current deputy headteacher and former pupil – and his colleague (and former teacher!), Jennifer Eley.

‘I started as a pupil at Forest in the summer of 1989,’ Graeme explains. ‘I was one of those children that just ran up to kindergarten and forgot to say goodbye to my mum! The rest, as they say, is history.’

‘Graeme has always been a very friendly, well-liked person, and has never stopped smiling,’ she says. ‘Nothing seemed to bring him down, and he has maintained that wonderful outlook on life.’

‘I wouldn’t say I was the most focused’, Graeme adds. ‘Mrs Eley did wedge my desk back in the far corner of the classroom!’

‘In Year Three’ – Jennifer points to a chair in the corner of her classroom- ‘that’s where Graeme used to sit, in the corner! He was always out of his place and chatting, but he worked hard and he was a pleasure to have in the class.’

‘I was horrified because when I moved to teaching Year 5,’ Graeme recalls, ‘a pupil of mine opened their desk and found that I had scribed my name into the wood of the desk lid. That was one of the most awkward moments of my teaching experience!’

Many of Graeme’s favourite memories of his time as a Forest pupil were on the school’s popular trips – some of which he has even repeated as teacher.

‘My favourite day of the year was going to Stockley Farm. I remember falling in the lake both as a child and a staff member. You get the same buzz – and the same shock! – but as cliched as it sounds, I really was making memories.

‘I look back fondly and still remember those trips, so I want to make sure our pupils still have those same opportunities.’

Graeme went on to complete his work experience at the school, before studying for a degree in Primary Education. He achieved a BA (Hons) with QTS (Qualified Teacher Status) from Manchester Metropolitan University.

‘He came back to Forest to do his work experience, and he basically never left,’ Jennifer explains. ‘He worked as my teaching assistant for two years. He would go to college in the morning and come here in the afternoon.’

‘It was maybe a subconscious thing – a natural calling,’ Graeme adds. ‘Teaching often doesn’t feel like work. I feel like I’m still at school myself, to be honest.’

During his degree, he realised just how much he enjoyed teaching.

‘I did a placement at another school where I taught Year 6. Half of the children were on behaviour plans; the other had specific learning needs. Taking on that challenge made me realise this is what I want to do for my career. Those pupils made me a teacher – they broadened my understanding, tested me, and opened my mind. I owe them an awful lot.’

After his degree, Graeme took on a teaching role at Forest, progressing to Deputy Headteacher several years later.

‘Coming back to work here was like coming home, as cheesy as that might sound,’ Graeme says. ‘Things had changed, but the ethos had stayed the same. It’s hard to explain ‘the Forest way’ – that intangible thing that becomes a part of who you are.’

‘The Forest Way’ is the school’s strapline and long-standing ethos, encompassing both its traditions and its focus on looking ahead.

‘Forest combines the old ways and moves forward with the new – and that is what Graeme is good at,’ Jennifer explains. ‘It’s a small school with a very big heart.’

Graeme has now been teaching at Forest for over a decade, building some brilliant memories along the way.

‘My best day at work was when Rick Hyde, Forest’s current head, celebrated a big birthday a few years ago. I had planned a 1970s themed garden party at the school, and he was clueless!

‘We told him to come in late; to take it easy on his birthday morning. So he arrived mid-morning and the whole school was hidden behind the hedges of the playground, before jumping out to surprise him! It didn’t help that I, dressed in leopard print trousers and a loud t-shirt, jumped out at a dog walker first, thinking it was Rick…

‘We had a party all day – a picnic, games, his family came… that day encapsulated ‘the Forest way’.’

And what about the tougher moments?

‘The inspections have been some of the biggest challenges, but these bring to the forefront the element of teamwork,’ explains Graeme. ‘So the proudest moment – our last inspection in 2018 – was recognising how important all of us are, playing our parts together.

‘This is echoed in the way we teach the children too. We encourage children to work collaboratively with different age groups, and this is something I want to drive further as headteacher.’

Soon to approach its 100th anniversary, Forest Preparatory School was rated ‘Excellent’ in all areas by the ISI (2018), with an ‘outstanding’ Early Years department. The school teaches children aged two to 11.

Despite maintaining its long-standing traditions, Forest has seen great development, particularly since welcoming the support of Bellevue Education.

‘One of the biggest differences now is the range of technology – ‘chalk and talk’ has developed to become a much wider variety of teaching styles to ensure children reach their potential. We encourage awareness of ownership of learning. I feel Forest children today, compared to when I was here, have a much better understanding of their own independence.

‘The curriculum has developed an awful lot, especially due to the support from Bellevue, but the values have always stayed the same. I do want to develop the school and explore new avenues, but I think I can say – as a pupil, staff member and now leader – the heart of it should still be done ‘the Forest way’.’

What makes a head?

Following a conversation in summer 2020 between current headteacher Rick Hyde and Graeme, the two decided to swap roles, with Rick stepping into deputy headship and returning to in-class teaching and Graeme taking on his first headship.

‘I have spoken to a few of our former heads about Graeme’s appointment, and they are not surprised!’ Jennifer says. ‘All the staff enjoyed teaching him because he was so helpful. He once got up early on the farm he grew up on, picked some carrots and brought them to me, covered in mud!’

When asked about how Graeme has grown with the school, Jennifer is quick to respond.

‘I think he has learnt to step back – to analyse the situation. He doesn’t make snap decisions, which maybe he would have done at one time. That’s going to make him a great head.’

‘The best thing about Forest is knowing every single child and what their values are – it’s not what we give to them, but what they bring to us,’ Graeme responds, humbly. ‘We are supported by Bellevue and by the parents, but it’s the children that keep ‘the Forest way’ evolving year after year. It’s about recognising their values, be they art or music or sport, and using those strengths to make sure that they enjoy reaching their potential – not that they have to strive, but that they want to. I felt that’s what Forest did for me, too.’

From September, Jennifer will find herself in the unusual situation of being led by her former pupil. How does that feel?

‘It must be unique to have a staff member with a boss who is her former pupil! But we work so well together. I actually see him as a great role model.

‘Graeme and I are each other’s sounding board. But he’s got that ability to stand alone, move us forward, and be firm. I feel this is how Graeme has grown with the school – he can reflect and see the bigger picture, but he is still the Graeme I have always known.’

Graeme has also maintained his love of animals inspired by growing up on the farm, and mastered the art of work-life balance, enjoying getting out in nature in his spare time.

‘I love walking my three dogs – something I appreciate more since lockdown. I go for an hour-long walk every night with them, whatever the weather, and this gives me the time to reflect on the day.’

Jennifer adds: ‘Last year I told Graeme that one day it would be his destiny to be head here. This team, he and Rick, are going to be the best team we’ve ever had – the pair of them are amazing.’