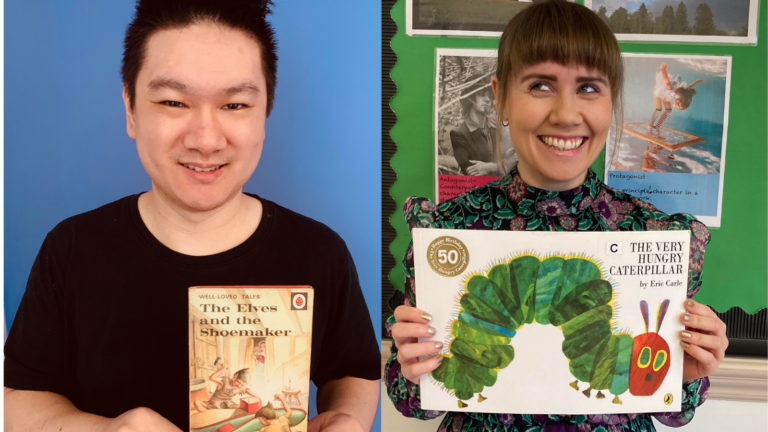 To celebrate World Book Day this Thursday 4 March, staff across the Bellevue Education Group have been reflecting on their favourite childhood books.

The book selected by our CEO had a lifelong impact.

‘I wasn’t an avid childhood reader, but To Kill a Mockingbird captured my imagination like no other book. I picked it up by accident; it wasn’t a book read in English at school. Up until that point my reading material had been books by Jack Higgins or Agatha Christie. I remember playing the inspector In an Inspector Calls when I was around 14. Harper Lee’s book was on another level; it made me think in a way I hadn’t before, or rather, it helped me make sense of random thoughts I had in my head.

‘I moved from Stirling in Scotland to West London when I was nine. Back in the 80s, that was a pretty big contrast, and with the excitement of a buzzing city I also saw for the first time very significant inequalities. Racial, obviously, but also poverty and deprivation. I left London for Cambridgeshire when I was 13, but those four years had a very profound effect on me, and yet I found it hard to clearly articulate my feelings. Then came To Kill A Mockingbird.’

Mark has also read the book to his 13-year-old son, who was named after central character, Atticus Finch.

‘I think he preferred watching the film with Gregory Peck starring as Atticus Finch,’ he says. ‘And who doesn’t like Gregory Peck? I think my son enjoyed the book, but found it frustrating that the main character was called Atticus, as Atticus is a name he wants for himself.’

‘I was maybe seven or eight when I first read The Selfish Giant by Oscar Wilde,’ Sam says. ‘I remember it standing out as really different from the other fairy tales.

‘The stunning descriptions that Wilde uses to describe the garden stand out in my memory. I also recall what I learned about it later, at around age 14, which was that the garden is a symbol for the soul, that the little boy symbolises Jesus and the tree is symbolic of the cross. It was the first time I had really heard of the term ‘allegorical’, and I was mesmerised by how a story I had enjoyed had so much more depth and meaning.

‘I would definitely recommend this book for a bedtime story. I bought it again last year and read it to my niece, who was six at the time. She loved listening to it! When she’s old enough, I’ll pass on the symbolism and hope it becomes her favourite story, too!’

Nick tells us his favourite book is ‘The Lord of the Rings, by J.R.R. Tolkien.’

‘I was probably about 9 or 10 when I first read it,’ Nick explains. ‘I really enjoyed the character Gollum, and how he pursued Frodo Baggins seeking to acquire the ring. But it’s the wizard Gandalf who stands out in my memory, and how he sought to prevent destruction and support Frodo on his journey through Middle Earth.

‘The films have brought the book to life and I’ve watched these with my sons.  I would recommend the book to anyone who enjoys fantasy stories.’

Charlotte has chosen We’re Going on a Bear Hunt, by Michael Rosen.

‘I believe I first had the story read to me as part of a Reception or nursery class, so I was probably four,’ Charlotte says. ‘I loved the different sounds of the different parts the family are going through on their bear hunt, and enthusiastically joining in with my peers as we read it out together.

The part which stands out the most in Charlotte’s memory is the famous words: “We can’t go over it. We can’t go under it. Oh no! We’ve got to go through it!”

‘They are engrained in my mind and I’m sure I’ve recited them on recent winter walks, squelching through the mud with my boyfriend during this third lockdown.

‘The book is timeless and I’m sure will be one I will share and enjoy again with my future children!’

Nour’s chosen book is the popular ‘Where The While Things Are’ by Maurice Sendak.

‘I was six years old when I first read this,’ Nour says. ‘I remember my favourite part being when Max (the main character) was hailed King of The Wild Things over his subjects. I also admired the use of fantasy and make-believe to create a story spun from Max’s wolf costume.

‘I regularly read this to my two kids and it’s a firm favourite!’

Daniel recalls his memories of the Brothers Grimms’ The Elves and The Shoemaker.

‘I liked that the elves were so selfless in helping the poor old shoemaker and his wife,’ he explains. ‘I remember my dad reading it to me and the voices he would use for each character.

‘I had to dig my old books out of the attic since my daughter was born last November. I have already read it to her several times. The book was purchased for 18p in 1965 – what a bargain!’

‘As a child, my favourite books were Roger Hargreaves’ Mr Men books,’ Allan tells us. ‘My parents read a range of these to me.

‘My favourite of this series, apparently, was Mr Daydream, and I must have been reading these with my parents when I was around two. I still have a copy, and the plot centres around Mr Daydream taking a boy who sits bored in a history lesson off on an adventure, where they meet a big bird, a crocodile, and visit the North Pole and the Wild West. It turns out that it’s all just a big fantasy, but the boy decides that daydreaming is far more fun than history.

Allan jokes that this obviously hasn’t shaped his life very much, as he himself has gone on to become a History teacher – ‘but I do like travelling and adventures, so maybe it has had a small impact,’ he adds.

‘I’m sure I’ll read them to my daughter – our very own Little Miss Chatterbox – soon.’

David’s favourite childhood book is The Adventures of Huckleberry Finn by Mark Twain.

‘All of the adventure scenes of floating down the Mississippi River on the raft, and getting in and out of scrapes along the way, is exactly what adolescent boys dream about doing instead of going to school!’ David says.

‘The ending of the chapter about Huck’s stay with the feuding family, the Grangerfords, is very powerful. There is a lot of humorous satire built up early in the chapter, and after plenty of laughter and fun, the ending leaves you feeling rather gutted.’

David’s son has read the book himself, along with another Mark Twain classic, The Adventures of Tom Sawyer.

‘Huck Finn can be read at two levels,’ David suggests, ‘as simply a boy’s adventure story; or as a rather searing social satire. It would be good for parents to be ready to discuss any questions that may arise.’

‘One childhood book that stands out in my memory is The Hungry Caterpillar, by Eric Carle,’ Charlotte says. ‘The book is so colourful, and I remember loving the illustrations of the different foods.

‘It’s really interactive as well – with each bite the caterpillar takes, there’s a hole “bitten” into the page.’

‘As a child, at maybe six years old, I performed in a school production of the story. I played an orange. Thankfully, no costume was required, but I remember proudly holding up my drawing of an orange for the duration.’